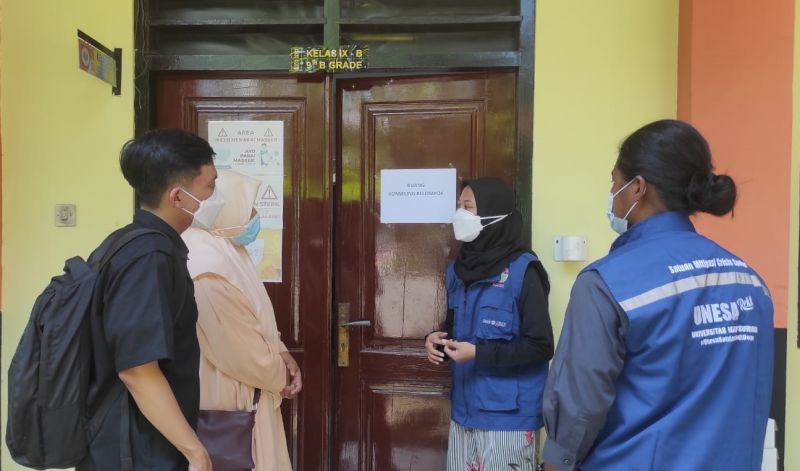 Unesa.ac.id, SURABAYA-The team from the Crisis Center Mitigation Unit (SMCC) of the State University of Surabaya (UNESA) provided trauma healing to students and teachers as well as parents of students at SMP Labschool Unesa 2 Surabaya, Ketintang on Tuesday, June 21, 2022. The school took immediate action to overcome the trauma after a series of accidents in Tabanan, Bali, last Saturday (18/6/2022).

Deputy for Academic Affairs at the Unesa Labschool Management Agency, Widya Nusantara, explained that the trauma healing involved all students and teachers who were members of the study tour group to Bali. According to him, the psychological impact was not only felt by the passengers of the two tourism buses who had an accident, but the other vehicle groups of course experienced shock.

The trauma healing also involved the parents of the students. "As a parent, of course there is a sense of worry. That's why we provide treatment as well. The students are safe and we will restore their psychological condition and we hope that the parents will also be calm,” he said.

Widya added, after the team conducted an initial assessment when the group arrived in Surabaya, the students' condition was fine. Indeed, there were four people who were injured by shards of glass, including a sports teacher. However, it was not too severe and has been taken care of.

"We've checked. Clear, nothing to bad. Even the little blisters are fine and are doing their normal activities. However, psychologically it needs to be treated. We, the school and SMCC, really focus on psychological treatment and assistance. For school activities, we will postpone until the handling is complete," he explained.

Wiryo Nuryono, Head of the OHS Division of SMCC UNESA stated that around 20 personnel consisting of UNESA counselors and psychologists were involved in providing treatment to all students, both class VII and class VIII. Even to teachers and parents of students. The treatment given, he continued, was individual and some in groups. It is based on the level of trauma or psychological conditions experienced by students.

“For the individual, there is his own team, his own approach and his own room. Likewise the group. Everything has been prepared and is currently in the healing process. Later friends from the City Government will come here, we have coordinated. We give treatment together," he said.

"Regarding how long this treatment will last, his party cannot determine, because someone's trauma can sometimes be treated quickly, sometimes it can take a long time. Unpredictable. But we will continue to give our best until everyone recovers," he said again.

Bagus Adam, the teacher who accompanied the students on the bus involved in the accident, was present at the school. He wore short-sleeved batik and was seen busy taking care of the participants who took part in trauma healing. On his left arm, there are two thin, slightly blackish scratches about 3-4 cm long. "This is a scratch on the glass at the time of the incident. I sat in the front with the children," said Adam while showing his scar.

He recounted, seconds before the incident, the bus was actually moving slowly, but the road was right on the descent. When he found out that the brakes had failed, the driver immediately told the passengers to remain calm.

“There was actually no screaming or panic on the bus. Conditions in the bus strictly follow the instructions. Until I got out of the crash, it turned out that the students had gone out on their own and broke the glass themselves to get out. Some of them I helped out through the window, “he said.

The calm students turned out to be conditioned by the accompanying teacher and the driver. It is also known that students and teachers of SMP Labschool Unesa 2 Surabaya have been equipped with emergency response skills plus skills obtained from scouting activities.

"Because the children already know how to do first aid, they immediately treat their wounds themselves with the first aid kits that we have prepared. Only then came the local medical team and police. So far I'm safe, I hope the trauma healing goes well and students recover as usual," he said. [UNESA PR]