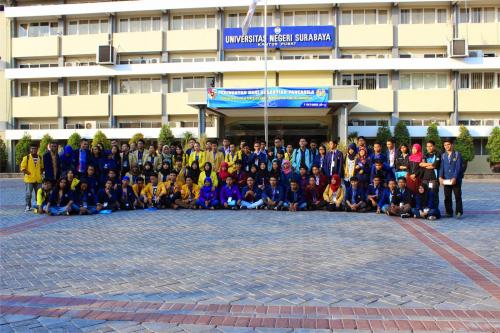 From the history of its institution, Universitas Negeri Surabaya (UNESA) was originated from the forerunner of the integration of B-I and B-II courses in Surabaya into The Teacher Training and Education Faculty (hereinafter referred to as FKIP) in 1960. Later in 1961, FKIP was integrated with PTPG to become FKIP of Surabaya Branch of Airlangga University Malang. In 1963, FKIP Airlangga Surabaya was again integrated with Teacher Education Institute (IPG) to become the Institute of Teacher Training and Education (hereinafter referred to as IKIP). After IKIP was established, FKIP Malang became IKIP Malang and split from Airlangga University. At that time, IKIP had many branches, including Surabaya, Madiun, Singaraja and Kupang Branches. Surabaya Branch of FKIP Malang became Surabaya Branch of IKIP Malang.

UNESA is an institution that has a dual mission which still has a base as an Educational Personnel Education Institute (Bahasa Indonesia: Lembaga Pendidikan Tenaga Kependidikan /LPTK). UNESA continues to carry out its main mission, which is to organize educational and non-educational programs, so that UNESA commits to serve as a producer of educational personnel for preschool, basic and secondary education. In accordance with the Presidential Decree No. 93 of 1999, UNESA has the following duties: