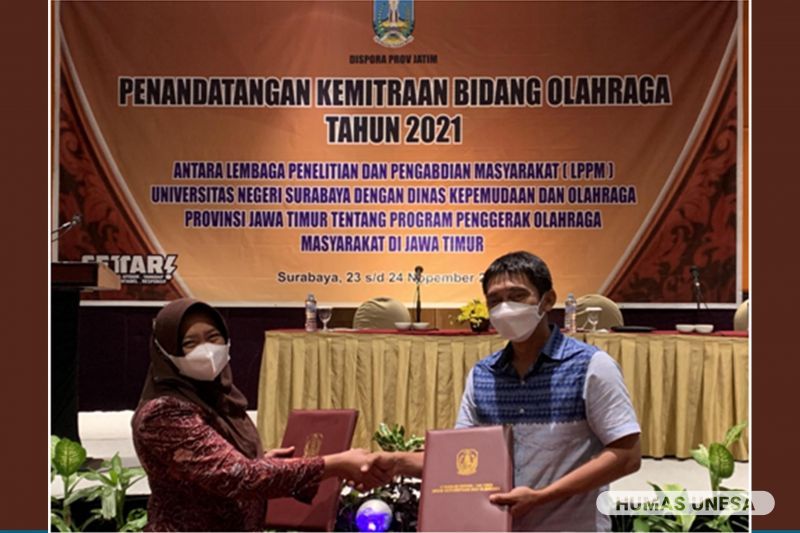 The event was attended by the leadership of district and city offices in East Java. Meanwhile, from UNESA, the Head of LPPM Unesa, Prof. Dr. Darni M., Hum and Dr. Mochammad Purnomo M, Kes, as the Head of the Center for the Study of Sports Science, UNESA.

Moch. Purnomo stated that the signing of the MoU was a follow-up or continuation of the cooperation agreement previously made by the UNESA Chancellor, Prof. Dr. Nurhasan M, Kes., with the East Java Provincial Government. "The previous MoU, we followed up with the Head of LPPM UNESA to sign a cooperation in the sports sector, namely the Community Sports Mobilization Program (POM)," he said.

He added that one of the focuses in future collaborations is to solve the problem of very low physical activity of the people in East Java. This is inversely proportional to the sports achievements of East Java athletes who were ranked third at the XX Papua PON event some time ago. "This has prompted the East Java Dispora and LPPM UNESA to design a community sports drive program or POM," he explained.

In addition, the program is also to create job opportunities for graduates who are competent in sports to encourage people to like physical activities and sports. The POM volunteers will be placed in districts and cities in East Java.

The program is also planned to be carried out by a coordination and cooperation team between UNESA and the East Java Dispora and assisted by BAKORWIL in East Java. The provision of POM volunteers and socialization of the driving force for community sports had previously been carried out in Surabaya. "Now it's just a matter of walking, everything is ready, even we from UNESA have also collaborated with many parties to pioneer sports villages," he said. (UNESA PR)