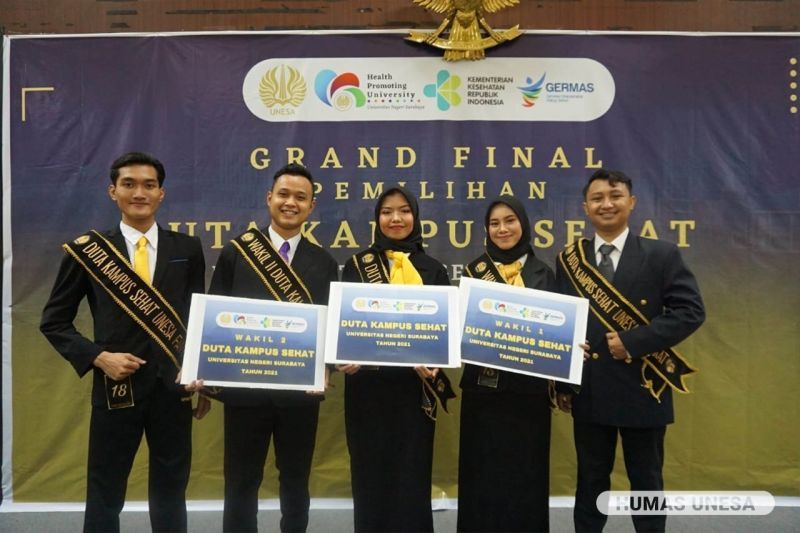 Unesa.ac.id, SURABAYA-The State University of Surabaya held a selection of healthy campus ambassadors in order to create a healthy campus both in terms of spiritual, physical, and healthy mindset. This activity was held at the LP3M Auditorium on Monday, November 22, 2021.

This event was held in several stages, namely administration, making a video campaign, interviews until several participants were selected in the grand final. In the grand final round, participants were given a short speech session and questions about the latest issues, such as mental health, sexual harassment, a green campus which is not far from being a representative of a healthy campus brand ambassador.

In the semi-finals, 10 participants participated and only 5 participants continued to the next round, the final. They are Enrico Satria Nugraha (FEB), Estu Candra Anggraini (FBS), Yoga Kusumawardhana (FBS), Melati Khatulistiwa (FBS) and Bagus Liyanto Leonardo (FIP).

The five participants competed again to win the title and become ambassadors for a healthy campus. In the end, Melati Khatulistiwa from FBS won the first place, followed by Estu Candra Anggraini also from FBS and Bagus Liyanto Leonardo from FIP. In addition, Enrico Satria Nugraha from FEB managed to become a talented ambassador and Yoga Kusumawardhana from FBS as a favorite ambassador.